Our Love Story & Why I Never Loved Valentine’s Day

Truth: on Valentine’s Day my husband worked and I was home. At 9 pm he ate a peanut butter and jelly on one side of the couch and I had cereal on the other. Granted, I am almost 39 weeks pregnant, but still, I’ve never been one to make a big deal out of Valentine’s Day. 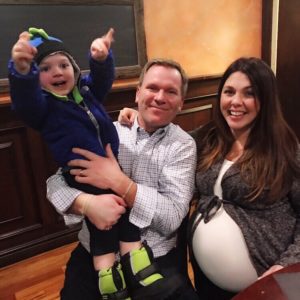 Our big night out last night- visiting Mo while he worked at The Point Ale House- swollen, no make-up & PJ Pants! Not very romantic! I think our last time as a party of 3!

I am all about love. But I’ve never been a fan of Valentine’s Day. I always felt like it was a contest of who is loved the most… from who got the most Valentines cards in elementary school to who got a delivery and sent a rose from Cupid in high school… to who got the best present posted on social media as an adult. I feel like it makes a lot of people feel bad about themselves… and I hate that.

There were many, many years where I was disappointed on Valentine’s Day. When I was alone on Valentine’s Day. Some of my best were going out with my group of girlfriends to celebrate being single. I loved being single most times- but I always said I wish I could just get a quick sneak peek at a few years down the road and know that I would eventually meet “the one” then I would have enjoyed it even more. I now know that’s called having faith.

I’m so blessed my life is full of love, but it wasn’t always that way. I’ve had more than my fair share of heart break.

I want to share a little bit of my love story with Mo. Before I met him I hadn’t had a boyfriend in years. I guess my friends (they were all married, getting married and having babies) were starting to worry because there was a period of time where people were trying to set me up and it was bad date after bad date. They would try to set me up with anyone else who was single just because they were single. I appreciated the intent but it was exhausting. The one guy I was “dating” and really liked would go through periods where I wouldn’t hear from him and he’d bail on plans and I constantly felt disappointed and like I wasn’t good enough. So I finally decided that was it. I was done dating. No more set ups. I was never one to dream of my wedding or really even have a desire to get married anyway. I was just going to focus on me, do things that made me happy, invest in myself (and maybe a new bag and shoes) and enjoy being single. I didn’t realize at the time that I was practicing being present and self love.

I remember a rare Saturday where I didn’t overbook myself with plans. I was sitting home alone on the couch. For the very first time I was okay with that. I was okay with being with myself. With silence. I was grateful. I said to the universe, if this is your plan for me, then I’m happy with this life. And at that moment, I truly was.

Days later I met Mo. Well, we didn’t actually meet. He saw me on Twitter and reached out to my co-worker (a mutual friend) to introduce us. At the time he was in the media a lot as the head basketball coach at Hofstra – but not being a sports fan I had no idea who he was. But his tweet and email were clever, so for some reason, I responded. Little did I know, but he didn’t have Cablevision so he didn’t know much about me either.

Our first date was not good. He tried to impress me… and it didn’t work. I thought he was full of himself. He did not like me either. I asked him what his full time job was (I thought basketball coaching was an after school sport) and he got insulted and I thought that he thought I wasn’t smart. And I could not have someone thinking that. He says… he could not have me not liking him. So a few days later he asked me out on a second date… and for some reason I went. And we fell in love.

For the first time though, it was easy. There were no games. I felt like I was a priority and important to him. I couldn’t wrap my head around the plan making and texts and phone calls – I wasn’t used to that. He called me out on things… and when I started to play games because I’d get nervous it was too good to be true… he made me feel special… and was clear about what he wanted. I made certain he knew that I WANTED to be with him… but didn’t NEED to be with him. All I ever hoped for was to be with someone who respected me as much as I did them, did for me what I did for them, and loved like I loved… and I found him. Well, he found me. 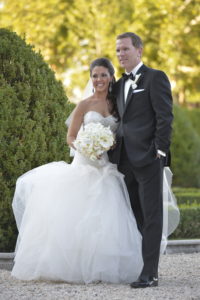 A year later, I knew a whole lot about basketball… and we were engaged. A year after that, we got married. We went through a lot together in a short period of time but I never questioned our relationship. I just knew we were supposed to be together. All of that heartache led me to him. And, all of that heartache leading up to him made me really learn to love myself & appreciate true love.

It hasn’t always been easy. Far from it. We’ve been through a lot these past 5 years but there is no one else I’d want to be on this journey with. I believe when you let go and let God, you end up right where you belong. So if you are feeling down this Valentine’s Day – remember you are enough and know your worth and that you are so deserving of love – so go practice some self love … focus on you… do the work, so that if you want to meet the one, your heart and soul will be ready when you do… and have faith that you are where you are meant to be right now.

Sending so much love your way.

Any day now… Fears & Tears… & how it’s all different the second time around!

Yes, I feel like I’ve been pregnant forever... yet I also can’t believe this baby can come any day! (Caution: I’ve become very emotional lately! ) My body is ready. I feel ...